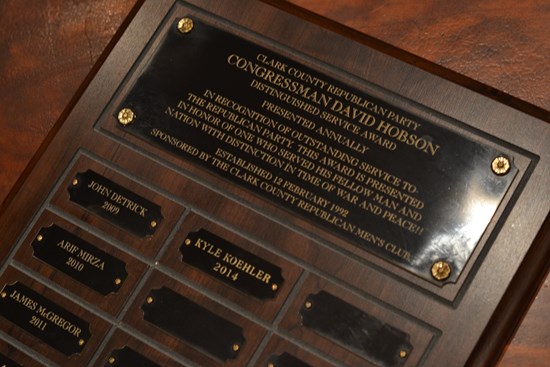 "In recognition of outstanding service to the Republican Party.  This award is presented in honor of one who served his fellow man and nation with distinction in time of war and peace."

This year Kyle Koehler received this year's award for his service to the local party.

Besides running for county office in 2012, Kyle helped lead a youth effort for the Romney/Ryan campaign out of the party headquarters that included over 125 junior high and high school students and many of their parents from the Clark County area.

"I am honored to be included with the many names associated with this award over the past 22 years.  I believe service to the community is so very important.  Those who serve and sacrifice in our armed services give so much more.  It is important that those of us who don't wear a uniform - remember that we need to be active supporting at home what they protect abroad."

Kyle Koehler is currently running for the Ohio's 79th District seat in the Ohio House.